A Review of Deadly, Delicate by Kate Garrett 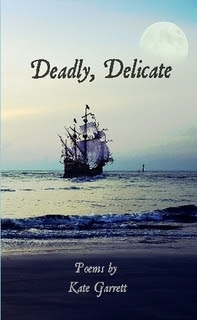 ‘Show a leg, sailor,’ I nudge her ribs,
wreathed in petals of sunlight
as the creak-cry of gulls
splits her gummed eyes.

There’s nothing mainstream here; instead, within the 14 poems of this collection, we see a layering of humanity within the pirates. There is most definitely violence, thievery, and hard-natured greed; but in equal measure, we peek into the breeding of the outsider nature of pirates, as well as their intimate dealings – both in love and in the need for touch and freedom.

From “Anne Bonny walks out to sea”:

If only he brought fire from our bed
to steam the water’s edge.
He lacks ambition.

The stories are fictionalized but weaved around a historical foundation – which, for the reader’s ease, there is an Appendix section, along with notes on terminology for those of us who aren’t familiar with the sort of phrasing used in pirate culture. The book itself near enough fits in most average-sized back pockets – a charming and convenient attribute to the beautiful design of the collection.

Beyond the physical aesthetics of Deadly, Delicate, Garrett shows a variance in style, creating a deeper and more involved reading. The rhythmic and chant-like flow of “Picaroon” doesn’t clash against the image-rich and forthright intent of “Mary Read pleads the belly”, but instead manages to fill a spectrum of perspectives which moves from fairly broad to singled out stories.

The most interesting aspect of these poems, at least for me, is the indirect way they had me examine history’s issue with gender: the tenderness and aggressiveness supposedly assigned to sex, and the irrelevance of such assumptions. That said, there are facets to this collection most any reader can appreciate, whether or not the reader is generally interested in pirates, poetry, or history. Full and engaging, but modest in length and easy to take in, this is a book for everyone.

In Deadly, Delicate, Kate Garrett moves beyond her previous collections and proves she’s not only a poet with multiple voices, but also a storyteller eager to speak for the misunderstood.