A Review of Amorak Huey’s The Insomniac Circus 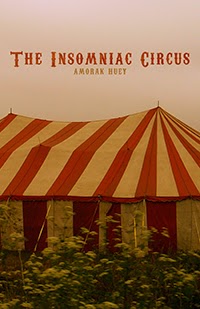 I have always had a strong affinity for any fiction or film that is carnival related. Never the reality of the situation so much as the possibility of what could be: that transient outsider encampment where natural oddities and games of chance intersect with exotic animals and feats of human entertainment, allowing us to leave the mundane behind for one night under the strings of flashing lights and striped tents. Real-life carnivals rarely live up to the imagined hype, but they remain a place of wonderment and awe in my imagination.

The Insomniac Circus by Amorak Huey takes me to that place, but only to draw back the shimmering curtain of wonder to show us the true inhabitants of the Big Top, warts and all. Huey admirably fleshes out that world with unique, complex, and believable characters. Each poem in this collection (from the wonderful Hyacinth Girl Press) examines a member of that wandering tribe of entertainers and roughnecks, and we begin, aptly, with the Ticket Taker, who is left behind and ignored as the masses shuffle past, “hungry for something more magnificent.”

The poems alternate between first person cautionary tales and those written in the second person POV, allowing you to become one of them as you leap from the sullen, lonely Ringmaster to the wandering, nostalgic Sword Swallower. Throughout these poems the circus denizens search for love, even lie for it, get mixed up in drugs, throw punches, suffer emotional breakdowns, and strive for redemptive comebacks.

Perhaps the most symbolic title in this collection, the one that sums up the whole, is “The Guy Who Walks Behind the Elephants With a Big Shovel Finds Himself in a World of Shit.” It’s a reminder that our victories and pitfalls are tailor made to whatever it is that we do in this life, and isn’t that the damn truth? The Globe of Death Motorcyclist learns that “too early exactly the same as wrong,” and the Human Cannonball that “it’s not the force of the trauma but the angle / that you need to worry about.”

And while we, the reader, may not find our own lives so neatly compartmentalized as the characters in these poems, each poem teaches us a lesson about life, the wonders and the rip-offs, lessons that are tangible and real, something we can bring home from the magical circle of lights out in the field, something that might actually help in our day-to-day. Or not. You’ll have to take your chances and see. I suggest starting with this collection. It’s a sure thing.

Posted by Hobo Camp Review at 8:51 AM

Our cover image is "The Harvesters" by Pieter Bruegel the Elder, 1565.