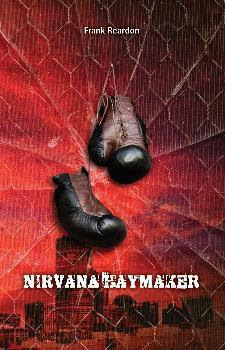 If Frank Reardon is anything, he’s unexpected. You’d think a Bukowski fan from Boston who loves nothing better than spending an afternoon with a thirty-rack of beer while the Black Crows blast from stereo speakers would write poetry with as much grace as a figure-skating steelworker, but don’t let his exterior fool you. Frank’s got moves. Yes, many of his poems are heavy gut-punches from boxing gloves filled with Zen from the wrong side of the tracks, but his poetry is diverse, and deep. Many are reflective, some are pained, but all are reminders to be aware of how unaware we are in our day-to-day lives. His upcoming collection of new works from NeoPoiesis Press, titled Nirvana Haymaker, is due out later in 2012, and from these poems, I got the sense that Frank is tired of running and chasing after nothing. He’s after the real prize—not riches and recognition, but a little understanding, comfort, and some kindness without the poison of plastic living so glamorized in every aspect of our American lives. Nowadays, that’s a tall order, but one gets the sense that Frank is finding his way there. Along the way he gives a tip of the hat to old greats—Jeffers, Celine, etc.—showing off some surprising chops. His poetic style is definitely not on repeat, no broken record is he. Sometimes he’s as simple as a crushed cigarette and other times he imbues his lines with an eloquent beauty rarely found in poetry from those more comfortable in quiet dive bars than opera houses. Again, Frank astounds because he’s unexpected, you can’t pin him down, pigeon hole him, and this is why I’ll be one of the first in line to get his new collection when it arrives. I hope you’ll be right there with me. For more information about his books, visit www.neopoiesispress.com