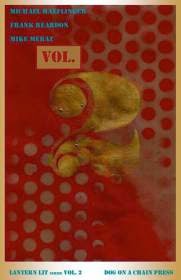 My life has been chaotic lately, so when I picked up a copy of Lantern Lit, Vol. 2 from Dog On A Chain Press, I was stressin’ pretty hard. Thankfully Michael Haeflinger’s opening section begins with a near zen-like look at the power of a community garden, and how seeing the world from your knees in the dirt can change everything, although there’s he confesses that the relief is temporary when he ends the piece with, “my knees ache and everything / flowers too soon these days.”

Yes, time does fly by, but Haeflinger’s poems focus on themes of community, reflection, and making the best of what we have while we have it as he wanders through flea markets and evening scenes, listening to dogs bark at . He has a nice balance of straightforward emotion, honest grit, and imaginative wordplay throughout his stanzas, with the pieces grounded in a place or a character working better for me, although “Here Sits The Devil” was an amusing and interesting piece of rhyming poetry that is well worth a look.

Frank Reardon is a favorite, and while reading his section I was reminded how easy it might be to pigeonhole his work as neo-Bukowski, but Frank’s poetry has depth and a genuine earnestness to it that sets it apart from the reams of Buk imitators out there. His work points out the almost surreal madness of the everyday, that it can feel like it’s all for shit in this life, but he continues to seek out the true, the simple, the peaceful moments between bouts of drunkenness, hopelessness, the shit jobs, and the crazy people working shit jobs. I like his shorter works here better here, the ones where he cuts out an image or two from the page of last night and splashes it with whiskey and then he dances away to the next poem just as you’re getting into it. I liked those shorter ones best, but then again I rarely finish anyone’s poems that run more than two pages, so I’m lazily biased!

The final section featuring Mike Meraz was a little more simplistic, going right at you with stanzas that wade through a beer buzz to show you a heart in pain, a lot of “boy falls for girl, girl falls for totally different boy” anxiety, underdog poems written from the point of view of a shop clerk who writes on the side. A few worked for me, a few didn’t. I wouldn’t say they felt as layered as the other works in this volume, but I really liked “Rainbows, Come Back,” in which Meraz admits his jaded outlook isn’t getting him anywhere and he yearns to see the world through eyes that aren’t beleaguered by “dull mist / this bedroom of horrors.” There’s a hint there that all this wheel-spinning has an awareness to it, which makes it all a bit more painful in a sense.

Overall, a solid release in the Lantern Lit series. I know more works in the series are on their way, and I’m excited to see where Dog On A Chain Press goes in the future.
Posted by Hobo Camp Review at 8:38 AM