A Review of Freak Kingdom by Timothy Denevi 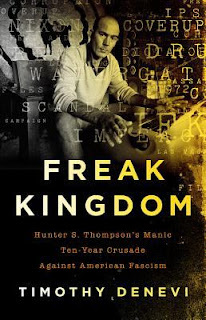 Hunter S Thompson was a thorn in a lot of sides, and for a lot of people across the political spectrum, but he reserved his greatest disgust for politicians who espoused authoritarian and fascist leanings. This book attempted to document that specific relationship, with mixed results.

On the positive side, Freak Kingdom was a fascinating look at what was perhaps his most important decade of writing, the mid-1960s to the mid-1970s, a decade of turmoil and corruption that burned him out so badly and pushed him so deeply into drugs that he'd never quite regain his full form. Some may argue that the drugs and booze fueled his writing and persona, and to a degree that’s true, but every person has a line where this fuel begins to burn internally, creating as much havoc in the mind as it does on the page.

And while the book explores a number of his face-to-face interactions with violent, power-hungry political and law-enforcement regimes, especially the horrific riots in Chicago during the Democratic convention, the book doesn’t dive as deep as I would have expected. It had so much ground to cover that it felt like it moved quickly from one event to the next, with snippits of Hunter's responses to a vicious scene or event before speeding on to another assignment.

The book clearly shows how over the course of this decade, we as a country came right up to (and sometimes sped past) the line separating the typical levels of political hypocrisy and outright American fascism. The Nixon Era was rife with such power-mad developments, and mirrors our life under the Trump Administration in terrifying ways, and as such I was hoping for a deeper analysis of this and how it relates to Hunter, specifically in a way that we haven't seen yet in other biographies or within Hunter's own work. In fact, there were many moments when I thought, “I should just be reading his own books instead of this.”

I guess my point is this: I liked the book, but there wasn't much here that felt new. Die-hard HST fans won't find a lot they didn't already know, and the author doesn’t tie in with the current political situation very much. But seeing these events unfold in the 60s and 70s and seeing Hunter's responses, one can only imagine how he'd react today: likely in the same way, writing in aghast at what we've become, or more truthfully, what we've always been and seemingly always will be. Hunter would be horrified by the Trump era of American history and how we’re witnessing a monstrous version of what we could become for good, only vaguely hidden behind a shroud of flags, chest-thumping patriotism, distracted journalism, and insane amounts of money.

This was an interesting ride with Hunter through a wild period of American history, but I felt it only skimmed the surface, or maybe I just miss Hunter that badly and wanted so much more.

Posted by Hobo Camp Review at 9:32 AM