A Review of Boom Box by Amorak Huey 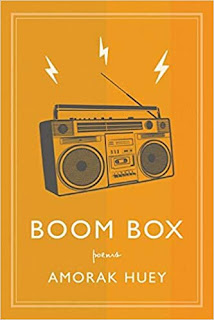 Amorak Huey offers a vulnerable collection in Boom Box, erasing the notion that times before were simpler. No one’s life has ever been uncomplicated. If anything, life gets easier as we realize we had paths to follow—but like finding our way out of a forest, it’s hard to not get lost before dark.

The world flattens
as we grow up: drone of adulthood: shaking, colorless future.

With a mixture of oddly titled poems and pop culture references that’d leave any ‘80s child nostalgic, this collection reminds us we weren’t as alone as we thought we were. We were all struggling, some more than others. We were all confused, not necessarily about the same things. We saw everything as an ending because we weren’t used to beginnings.
From this crumbling porch, I can sit on an overturned bucket
and watch the sky turn kudzu-green. Watch the tornado approach.

I can sit a long time without hunger.
There is no one here to count me present.

We didn’t have smart phones when we were kids. There was no place to check-in for likes. We weren’t seeking approval so much as trying to prove time existed—that we were alive and might make it out of our parents’ single-wide. That until we made it out, we’d keep ourselves occupied.

some mornings we woke
in my father’s twilit trailer, bored

Adolescence looks a lot different than it used to, as do our towns. You can still throw a rock and hit a church by accident in ; people are still gonna point fingers from the pews. Idleness is passed by scrolling now. When I was young, we had VHS movies and free reign of the woods, no matter who owned the land. There is a constant, though: we’re about as prone to soak our emotional aches in what the radio lends us as we ever were. Like Huey, music was my savior growing up. It’s the only thing that remained the same through the disappointments, insecurity, and ruckus. No matter what happened in a day, a cassette tape could always be rewound and an escape could be started over.

Huey inserts references to the likes of Indiana Jones, KISS, Star Wars, and nearly anything remnant of the ‘80s, but it’s how these fandoms are mentioned that matters. Culture has always been alleviation, a distraction from feelings we don’t want to decipher. In these poems, Huey entangles these touchstones of the times to point at the less apparent shifts that took place not only in , but in . Divorce was becoming more common, families looked different, and there was no Google to answer the questions we weren’t supposed to ask—about our bodies, our sexuality; instead, Huey turns to a Ouija board for answers. That’s really the brilliance of this collection: heavier topics are laced with references that make us smile; the hopeful moments are tied to nostalgia. There’s balance in every poem and at no point do we as readers feel exhausted by memories. Actually, we want more. It almost feels like being part of movie shorts, or at times as if we’re in conversation with Amorak.

I’ve never found so much of my home and my upbringing in a book. Whether you’re from the South or not, you can find yourself in these poems. Your youth might’ve looked different but not by much. A lot of us watched the tail end of our parents’ marriage; we questioned our femininity/masculinity in places that held strict guidelines for both with no room for anything in-between. We looked for a way out.

—from “Self-Portrait as Dustin Hoffman in Tootsie

If you read anything by Amorak Huey, let it be this book. Let Boom Box take you home, whether you miss it or you need a reminder of what led you here.