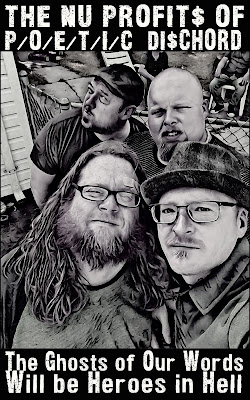 This four-way block party contains poems from Jason Ryberg, John Dorsey, Victor Clevenger, and Damian Rucci, and feels like a supergroup of malcontent musicians kicked out of other bands who all said, “Screw this, let’s start our own thing.” And this is the result, a well-curated and smartly designed collection wherein all four offer something a little different.

Jason Ryberg’s poems are accentuated with middle fingers toward the powers that be, roadside temples in honor of the little guy. This is clear in the first poem in the book, “An Open Letter to Lucas Jackson,” a fantastic poem about the hero/anti-hero of Cool Hand Luke, one of the greatest films about someone who just wasn’t born to function in this world. This sentiment is repeated in other pieces, the pushing back against the restraints of this hustle-and-die culture of ours. As Ryberg says in “My Shoes, My Belt or My Haircut Never Got Me Laid”: “Got no fancy gilded pot to piss in…Got no antique grandfather clock to tell me what time it is.” It’s an uphill fight till the end, but Ryberg will keep going until the clock finally stops.

Damian Rucci poems offer a commentary on all that is “Americana,” poems that scan the landscape with a distrustful eye, and they document the choice of a road life over one that’s a little more domestic and settled. They’re poems that seem to declare, “I know what you want of me and no fucking thank you.” Yet there’s a decency in the poems. He knows the sins he may commit, but he commits them because they are good and true things compared to the hidden ills and evils of what society deems correct.

John Dorsey’s poems always strike that perfect balance between storytelling and truth-telling, blending personal tales with oratorical metaphors and core symbolisms about what makes a person tic, each poem outlining the ways in which humanity and the world is broken and shuddering all around us but still stumbling forward. One moment that captures this well is in “Greg Before the Fall of the Berlin Wall”: “when he drank too much / he could still remember all the lyrics / to rock you like a hurricane / he could build a trojan horse / for helen of troy / & tell time by the sun / to keep him / from getting lost.”

Victor Clevenger’s poems take a political bent here and there, speaking on southern hatred, political turmoil, and all the means and manners in which the lower classes grind through the days however they can. The poems speak of rushed sex and late night starvation, of criminal acquaintances and couch surfing, but also of hope for a love that lasts, of children that grow up into a better world, and of a moon that might guide us all home one day. It’s an excellent way to wrap the book by sticking to familiar themes but adjusting for geography and temperament just enough to become special and unique.

These poems all explore themes of living the rough life, struggling against poverty and expectations, and of yearning for something better but knowing it may be just out of reach. They’re well-intentioned, well written, and full of heart. A worthy collection for this group of troubadour poets living on the outskirts of a town you know too well, but maybe not well enough until you read this collection.