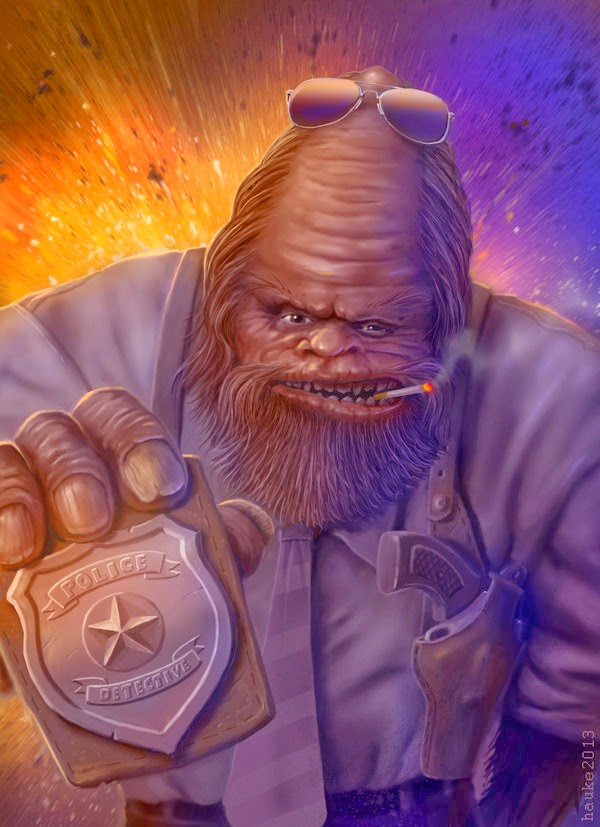 A few weeks before reading Kevin Shamel's Bigfoot Cop (I was reading the much inferior Dubliners), I was asked by the professor of my usability and documentation class if anything was new in my life. I showed the cover of Bigfoot Cop to the class and I saw them become younger. They turned into kids. The professor was more interested in Bigfoot Cop than the class. He had me read the tagline: “He’s huge. He’s Hairy. He’s pissed off and he’s got a badge. He’s BIGFOOT COP.” He couldn’t stop laughing.

When I showed the cover to my year old nephew he took the hell off and came back to my room with his chin quivering. I picked the book up again and said, “Rawwwwwwwwwwwwwrrrr,” and the little guy took off for good. My sense of childhood sucks but I know a little about Bigfoot.

I used to collect the clues a Sasquatch left for me and put them up in my treehouse. Old cans, wire and aluminum plant tags, plastic tape. All of it was evidence of Bigfoot trying to contact me in a secret way and with abstract clues. But somehow if I looked at all of these things in the correct order I would learn where the monster’s home was. That turned out to be a place me and my friends called HELL, a woods behind my house that I would later determine to be a spiritland of some vicious entity that used the image of Bigfoot in my mind to lure me back there like that goddamn clown in IT.

Even though the modern human is trying so hard to become elctroinsectum, the old mammalian, the primate is trying to get us back in the woods to see the Skunk Ape, the Ts'emekwes, the Grassman. This urging is throughout Bigfoot Cop. My favorite was when Bigfoot Cop (BC) smokes a wooden bong up in his treehouse (he has a medical marijuana card). He thanks the weed plant and the holy smoke relieves him and extends him. And even more beautiful, he builds a large fire and throws sage, cedar bark, and sweet grass into it. Completely mammalian.

Not only does BC love his wooden bong, he also loves root beer, pizza, occult stones, just as the author Shamel loves those things. And when it comes to it, after reading this book, I’m convinced that Kevin Shamel knows the soul of the primate. He inserts himself into the proto-man in a way that the psychoanalyst Otto Rank’s Romantic type of artist inserts their personality into art. Kevin knows the dualism of Nature.

Bigfoot Cop begins gory. Bigfoot is in tune with and is one with Nature and his power is unrivaled by homosapiens. I once saw a nature video where a small monkey was ripped apart by a larger species of monkey. I remember the horrors of Nature to offset the idyllic human-imagined concept of Nature as a wonderland. BC rips off human arms no problem. He beheads with a punch. He drives a monster truck.

And then there is that other-quality there too but it is not so much mammalian as primordial. Shamel calls this Forest Magick, a sort of spirit power of the woods that Bigfoot hears more than homosapien. BC only gives his true name to ones that he trusts to maintain that power. I refuse to give his name. This Magick is something I believe Shamel feels himself, or else he wouldn’t go to the woods so much. He sure as hell wouldn’t go to Australia. It is this Magick that causes people to believe in Bigfoot and go camping, to sit around fires, a regression.

I want to be regressive too. Shamel’s book makes me need to go outside and feel the retarded cockcrow of my blood and wing it to space like a fierce-headed eagle. It is not a millennial feeling. None of that. It’s 70s. Classic rock. Really bright yellow sun, you know.

Posted by Hobo Camp Review at 9:19 AM