Right out of the gate, Frank Reardon’s poem “Heavy in the Dirt” tells you everything you need to know about his most recent collection, Blood Music. It gives you man in mature, man shrugging off his own ego, man learning to cope with humanity, as well as the lack of it. It’s a brief poem, but a good one and worth a look here:

Heavy in the Dirt

as the hiking boots
finally learn
to bend
more
than the spine
of a book,
I too
will not
look into the eyes
of man
until the
ego goes
blind.

Simple, brief, refreshing, and true, like a momentary shiver of rain when you’re hiking in a forest, something to make you stop in your tracks for fifteen seconds, pause and consider, and then move forward. But there are plenty of drinking poems, travel poems, and hard as hell days at work poems to walk hand in hand with the reflective, peaceful, soul-searching poems … because that last bit is what they all have in common. These poems are a purposeful trek toward change, an acknowledgement of all the good and bad we are, of all the chaos and isolation we experience, and it’s an attempt to mold that into a better vision of who we could be. 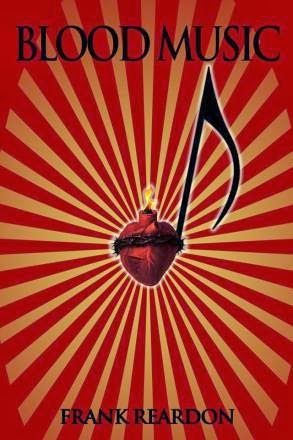 And Frank definitely has a clear vision of who he wants to be, or at least who he wants to be for some very special people in his life. Knowing a little about his background, his move to isolated Dakota country, his longing for his daughter far away, his struggle to keep her in his life, his falling in love with his fiancé, April…through the years Frank has seen hard times, but he’s been experiencing a blossoming of sorts, in life and in spirit, and this collection is about Frank putting into words this transformation.

I’ll admit, I wrote a flowery, metaphorical blurb for the book (which I’ll include below if only to caress my own ego) but my feelings about the book can be put into one single, simple statement: These are genuine, meaningful poems that made me appreciate his journey, and made me reflect upon my own, too. That’s what poetry should do.

My blurb, which appears in his book: In Blood Music, Frank Reardon’s poems are matches set aflame and dropped into the deep well of who we were, who we are, and who we might be, bringing to light all the small moments, the subtle revolutions, and the passing microcosms that we can never get back, save for these fleeting glimpses through poetry like Frank’s. Put together, these small moments reveal the sea change happening within all of us, whether we realize it or not. And from these poems, it is clear that Frank is well aware of the passing of time, the importance of final goodbyes, of the next bend in the wooded trail, of one foot placed before the other. It is an excellent collection that speaks honestly and without pretension, which is a rare and valued commodity in days such as these.

However you want to cut it, it’s a collection worth owning.
Posted by Hobo Camp Review at 9:21 AM