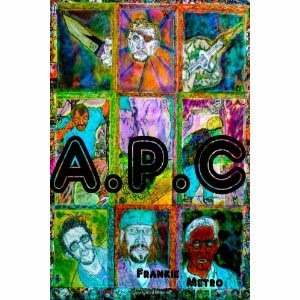 When I agreed to take a look at Frankie Metro’s recent poetry collection, A.P.C., I didn’t realize that agreeing to do so was the equivalent of going to a party, accepting a brightly-colored pill from a stranger, and then tripping the hell out. And, much like such an occasion, the experience definitely had its mix of twists and turns, perilous highs, dazed turnabouts, and what the collection lacks in clarity at times, it makes up for in attitude and barbarous lunges into wild abandon. A.P.C. (from Kleft Jaw Press) loosely follows the misadventures of a rather manic character called Archey P. Caane, and as Dustin Holland says in the introduction, Caane “spends his time traveling from the center of the conversation to the fringes of the imagination.” From what I read, that seems about right, but Caane travels well beyond that.

For starters, the first poem opens with the lines, “Archey P. Caane’s ghost/takes possession of the naked woman/to your left.” We then join him on an exploration of the oil in her heart and the ruins of her blood. We’re going in, out, through, and beyond the norm here. We hopscotch along with Caane through delirious kaleidoscope poem after poem. Some poems, like “Yojimbo’s Dog” and “I will eat lunch w/ Frank O’Hara. I will drink the moon w/ Rimbaud” are really great and are favorites of mine from this collection. I can latch on to them and follow them around for a while, but others admittedly reeled away from my grip and lost me for a bit, or to paraphrase Frankie Metro in his poem “Blank Acid Murder Weapon,” some of the poems become drug-induced moments of complete disintegration. It’s a hell of a ride, though, and while I had to read it in bursts, those with a heart full of joy, ecstasy, and frantic ambition may be able to make it through in one shot. Give it a go, I dare you, but you’ve been warned. It’s high-proof mania.