Review of 'Free Snake Poems About Snakes: Let’s Do This' 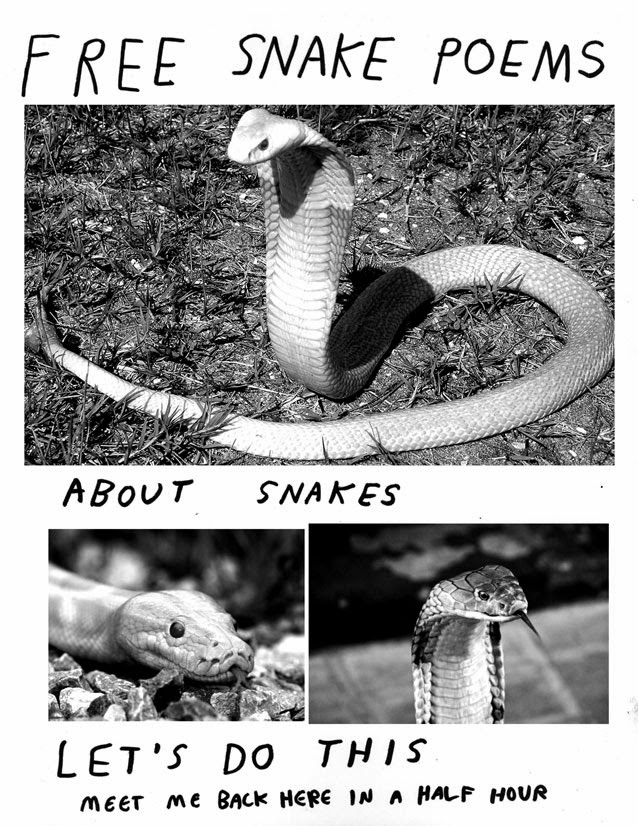 Free Snake Poems About Snakes: Let’s Do This (Meet Me Back Here in Half an Hour) clearly started out as some sort of “Wouldn’t it be funny if…” idea for an anthology, but even though the collection feels like a tongue-in-cheek lark, the ladies over at the fantastic Hyacinth Girl Press came up with a pretty great selection of poems here. The lighthearted approach certainly gets the reader in the mood from the start, and the cover is the kind of thing that, as a poet, if I saw it stapled to a telephone pole, I’d most definitely meet back there in half an hour, if only for a good laugh. Some of the poems within feel a little silly, in a good way, such as Rachael Deacon’s “You Are a Snake and I Hate Everything” and Margaret Bashaar’s “Totally Gay for Snakes,” which brings a smile with lines like “Mixing snakes and capitalism is wrong in spirit, yes/I have nothing to do with any of this” and “What are the chances of a penis being bitten by a snake?” Valid question. And yet none of the poems or poets feel as if they are straight up mocking the effort. Even the silliest poems offer playful verse, well-placed irony, and a line or two to make you realized you’ve underestimated the intent of the poet. This becomes even more evident when you stumble across works that take the snake theme into social-commentary territory, such as Shawn Maddey’s “The Art of Moulting” and Kristin LaTour’s “Eve Chooses Her Fruit,” which examine our beginnings, evolution, and the choices we've made along the way as a race of curious beings who have been known to make mistakes now and again. The range exhibited in this collection is appreciated. I came for the funny snake poems, and I stayed for the quality snake poems. Good stuff!