A Review of Ally Malinenko's Better Luck Next Year 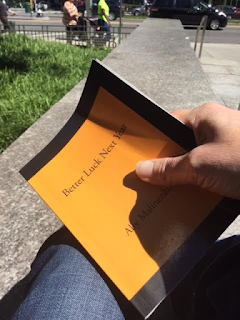 I’ve had recent discussions with friends about the arc of a poet’s subject matter over their lifetime, how it often goes from very personal and raw early on to exploring bigger, broader themes over time, social or political or what have you, and if done right a good poet can blend the two, capturing a moment and feeling that is so specific to one human life that it transcends all barriers so that readers of any background can feel it. Some writers can share those moments beautifully and at length, and some with stinging brevity, and sometimes the experiences are so profoundly life changing that a poet needs only one word, as Ally Malinenko was able to do in her new collection, Better Luck Next Year, cutting life down to the single word upon which her whole world hinged.

As Malinenko calls it, “The smallest hurricane of a word I know.”

We all have those moments when the voice in your mind boils everything you’re feeling down to just that, the switch flipping moment, the crux of your existence, when you go from one life to the next, birthed through a split-second canal of the letters F-U-C-K. Fuck. Oh fuck. Fuck me, is this really happening?

I’m focusing a lot on that one word, fuck, that one fulcrum sensation, because I felt it too, many of us have, that moment when the doctor keeps talking about the cancer in your body but your entire consciousness steps back and hangs on that one word as everything else passes by. And yet there’s a whole world before and after that word, that moment, and THAT is what makes Malinenko’s book so wonderful. It’s an examination of the two lives, melded at that one moment, because the before Ally isn’t the same as the after. That other person, the non-cancer person? That person is gone. And the one who remains is the one who is forced to reflect on that dichotomy every single day.

and I didn’t know it then
but I was saying goodbye for good
to all of you, yes
but also to me
because
this me
now

So really, this book is about two people. Two Allys. One Ally didn’t think about the possible flaws in her parents’ genes and the pros and cons of microwaving food or how important a last beer was with this friend or that. And the other Ally? The “now” Ally who has to listen to advice on drinking more fucking wheatgrass shots to kill the cancer inside of her? There’s a lot of changes in store for the now Ally. Step by step, Malinenko takes us through her days, her epiphanies, her catastrophes, often calling back to the old Ally, the one not besieged by doctors and nurses and the entire bastard insurance healthcare scam, besieged by an endless terror that could strike any of us, and has stricken far too many as it is.

…I woke
with a thing on my chest
a terror I had never known
like a bird that circled
all night
and waited until I was sleeping
to hook its claws
into the meat of me.

Malinenko is so simply eloquent and true that she makes the most personal of her trials too universal to resist, makes those midnight terrors so real you can feel your throat clenching as you pass from one stanza to stanza. I wept as I read her suffering the endless runaround as she searched for medical help, as she picked apart her life for the mistakes she might have made that brought this cancer to her body, as she searched her familial history for tell-tale signs too late to help, as she discussed buying a pizza with her husband on the way home from the hospital because that’s what a human being with or without cancer does when they have to keep on living, right? It is cliché maybe, but I’ll say it: I cried when I read her poetry, because it’s good and real and true and it hit home.

I don’t want you to know what having cancer is like. But I want you to know want it is like to try to keep being a human being when you are tagged for death and your new full-time job is organizing your entire existence so you can keep living no matter how much red tape and horror they stuff down your throat in fistfuls and fistfuls because heaven forbid if they don’t meet the bottom line and hit those profit margins. Most important, I want you to know that amongst all the bullshit, there are people like Ally Malinenko who still look for and find and create and give beauty in poem-form like little cancerous seeds of her own—poems that latch on, grow in you, make you better, stronger, beautiful, don’t destroy but make you human and whole. That’s what I want for you.

Her book Better Luck Next Year is now available from Low Ghost Press.

Posted by Hobo Camp Review at 9:57 AM