A Review of Alex Vigue’s The Myth of Man 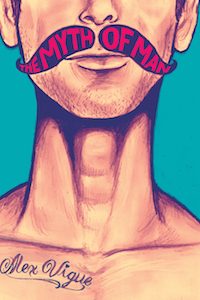 Masculinity doesn’t mean what it used to, which is to say: my god, finally. In “The Myth of Man” Alex Vigue offers more to manhood than tends to be allowed in society’s absurd construct and he does so with a grand mixture of grit, grace, humility, and humor. Through a queer perspective, Vigue lends us his own experiences and examinations and in turn presents a relatable view for most any reader – proving that maybe, just maybe, identity belongs to individuals and cannot be wholly contained by masculinity or femininity.

It’s in his mixture of bold tenderness that Vigue wins readers over early in the book, earning the page turns from both curiosity and sincere investment in his narration. Through the collection, the poems bounce between direct and metaphorical but remain accessible; intent is never overly buried or blandly waiting on the reader. Instead, the movement offers a pace that allows us to lean back and nod along but also keeps us engaged and eager to listen.

Queer or not, I’ve never met anyone who could claim to be completely secure in who they are or in matching up their view of self vs. what others make of them. Vigue presents that notion beautifully in – a poem that reflects the relationship people share to anything being discovered or even ignored.

“Neptune, full-color queer, quiet sky-lit sibling of Saturn.
He spins light years away from any cosmic object. He has
the names of men who discover and claim, comet past,
encircling his neck. Planets learn about themselves

through the telescope of titans.”

In a more intimate voice, Vigue tilts our attention to the harsh realities of displaying affection within a society that fears queerness. In You Said, “Kiss Me!” I Said “Not Here.” we get pulled into a moment – one that ought to contain a playful and innocent kiss but is instead a very real fear of how such simple affection could be met if seen by the wrong people. This poem is followed by I’m Still Writing About the Boy They Killed, where you’ll know what you’re getting into before you start reading, but that won’t stop the grab this poem has.

“The strength of a spider doesn’t come from fang or
poison;
it’s in the thread they bind you
up in.”

Though the poems are heavy at times, balance is the finest attribute of this collection. I wouldn’t attempt to say this book is more one thing than another; in it instead you’ll find humor to rival hurt, sexuality to outshine shyness, tenderness to stare down fear, and a fine unraveling of the myth of man.

The Myth of Man is available through Floating Bridge Press.