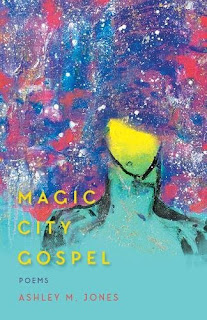 In Magic City Gospel, Ashley M. Jones delivers poems that conjure up everything from grits to God. Music is always in the background and her writing near enough holds your hand through the hardest parts of ’s past.

She opens this collection with the honest and innocent fear of being a child learning her history, what it once meant to be black in the South and what it is now. As readers, she doesn’t talk at us about Civil Rights or what it feels like to have dark skin in a state that hasn’t fully gotten away from its worst times; she instead takes us home and shows us what it is to grow up as a young black woman in .

“I ate red dirt for the first time
with Aunt Hattie – big, brown blind angel
who listened to local crimes

on her police scanner. Its monotone lullaby
crooned all through the night, piercing, faithful.”
(from Eating Red Dirt in )

For every bit of home or comfort, there’s a further glance backwards. History is referenced often, be it about slavery or crimes of hate - but never in a way we’re used to. Jones pays her respect not to what happened, but to those who happened to history. That said, you won’t see the names of the Klansmen behind the bombing of the ; instead, the little girls taken that day are finally given a voice:

“Under what God’s hand did we die like this?”

When Jones talks politics, she isn’t talking politics; she’s talking about the people in and around those politics - who got hurt and who’s getting hurt: then, now, and next. Anyone who isn’t concerned isn’t paying attention. At the risk of lessening impact, it’s best y’all see these poems yourselves, though I wish I could put every piece of this collection out for gander.

This is a book I can’t praise enough, and Ashley M. Jones is a voice I can’t wait to hear from again. No different than how southern recipes never taste the same when not shaped by southern hands, stories about the South have to come from storytellers of the South to be served correctly. The magic just can’t be known unless you’ve lived here. deserves Magic City Gospel, every bit of love song and ache that it offers.

“Let me wash you in heat
and tell you who you are.”

(from Riddled in the Heart of )

Posted by Hobo Camp Review at 9:27 AM