A review of This is a Land of Wolves Now by J. Lester Allen 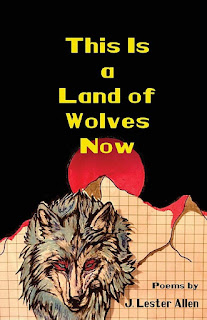 I’ve been waiting for a new J. Lester Allen book for years, and I am not disappointed in what he finally sent out into the world. There’s a decade of pent up existence visible between the lines of this one. The wordplay bends the light through these poems in the same shifting way neon glints off the rows of whiskey bottles in a quiet dive bar where the tired and restless go after a long lifetime of grinding hours.

“no feral, mad morning here
no accredited sun to chase off and
away, down a rickety flame escape
to the broke-bottled streets below.”

Down indeed, into streets and poems and stories mixed with grit and ephemeral qualities in equal measure.

In the poem “I would follow James Wright into battle,” he says, “This poem is a dream inside a war and the meaning is a wolfsbane tea of things,” and in that line I feel like he sums up his aesthetic; the dirty reality of this world mixed with a subtle wilderness of dreamlike surrealism, and every now and then a Beat-like stream of consciousness conjuring ghosts and souls and music and so much more. But it’s nothing overboard, nothing stylistically tiring, just the right amount to let you into a world a bit stranger and more savage than we expect.

Allen takes us through a series of small towns, college bars, farm houses, shambled loves, rooms where James Dean once lived, and days that feel so temporary and unreal that even as you pass through you might wonder if they’re even passing, of if they’ll even be remembered, or if this is your life or just a scene in a film you can hardly remember after waking from one hell of a hangover.

Allen remembers. He remembers each creaking floor, each instance she said this wasn’t love, this was just passing time. He remembers each blinking dawn giving rise to another grayscale edition of life, and he jots it down just in time to keep it solid forever, pressed in this book like a flower plucked from the side of a country road, meant for someone as a token of love but rejected and kept away, preserved for you to read. I hope you do, and I hope you enjoy it as much as I did.

Issue 41
Print & PDF versions for Issues 1-8 are no longer available, but may be re-issued in the future.